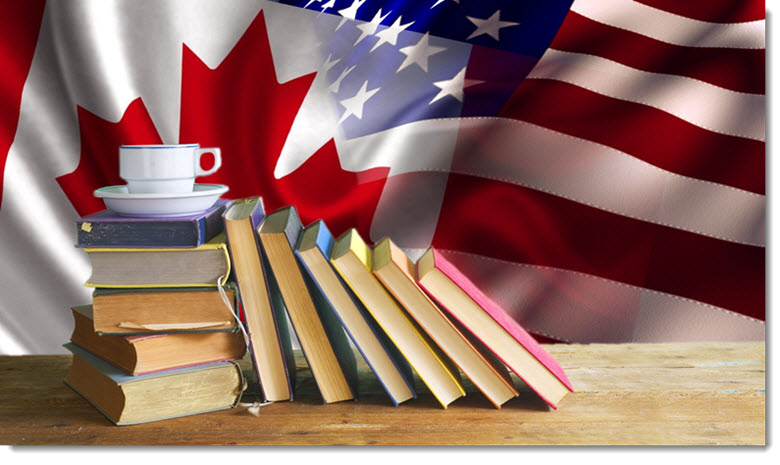 Having recently traveled in Canada, I came to the same conclusion that I always do when I cross the border: that our neighbor to the north is more sane, organized and in some ways more progressive. Certainly in terms of social issues, gender equality, and the general population’s support for marriage between same-sex partners.

But Canada also strikes me to be more literate in terms of how much of the populations seems to read avidly.

I suppose I could check statistics to see if Canadians are more devoted book readers, but in a way there are several strong indications that the culture itself is more concerned with literature.

In the U.S., the biggest and most important brick and mortar bookstore, Barnes and Noble, has closed many of its stores and no longer dominates the cultural landscape. In Canada, there are stores called Chapters/Indigo which is actually the merger of two book chains. Everywhere you go in Canada you see Chapters/Indigo bookstores and if you venture inside one of them, you’ll find a certain airy lightness, thoughtful displays of books according to category and lots of people spending time flipping through volumes. Many Barnes and Nobles are traditionally decorated, books are widely distributed throughout the store, and many of the customers are there for coffee and magazines or to buy other merchandise.

Beyond its bookstores, Canada has several important literary prizes that are televised on prime time television. One of them, the Griffin Poetry Prize, is an important award that is given every year and honors poets, both Canadian and International. The poetry readings are held in a large auditorium packed with readers, and there are long book-buying lines of people who are seeking autographed copies. Our most important juried prize, the National Book Award, is televised on a minor cable station.

But perhaps the most telling example of how Canada itself is more concerned with literature is a television program called Canada Reads. This is a prime-time show on the CBC where contestants passionately try to convince a panel of judges that a book they love should be chosen as the winner, and the judges make their choice not so much on the quality of the book but rather on how passionate and convincing the book’s advocate is. This makes complete sense in that it’s sometimes very difficult to distinguish one fine book from another, and what ends up being a favorite book often has more to do with a reader’s personal history and how accurately their  emotional state of being is reflected in the written word.

If you consider reading to be a fine pursuit then you may also be interested in this post: