“The Unknown Woman of the Seine” is one of those images, one of those phrases, one of those characters you can go most of your life never encountering – or never noticing, at least – until you do, and once you do, you start seeing her everywhere. 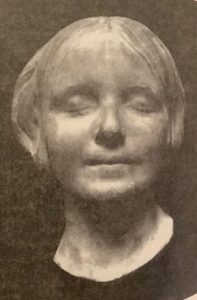 Hers is the tale – or two tales really – the first about the young woman whose body washed up on the banks of the Seine some time in the late 1880s, was taken to the city morgue, publicly displayed, never claimed, but whose face bore such a lovely and beatific expression that a caste was made – and this becomes the second tale: of the plaster mask that went from being an artist’s study tool to a poet’s muse, to the subject of short stories, novels, movies, and photographic essays, before eventually winding up as the template for the first CPR dummy, Resusci Anne, thus rounding these two narratives into a singular, circular whole – of the drowning victim whose surviving image served to teach us all how to save each other from, among other things, drowning.

For me, the discovery of this diptych – of woman and mask – took place about a decade ago, maybe a year or so before I started writing the book, which I did for the same reason I write any book: because my mind keeps returning to it, and to the questions it poses. In this case (and assuming any part of the origin story is true), what life could account for the expression we encounter on that mask? Maybe more to the point, what death?

Without entering too much into process, research followed. And surmise. Certain resemblances asserted themselves, and by their lead, the beginnings of an answer started to take shape around other secondary questions having to do with the acute effects of longstanding physical and psychological trauma, the Sino-French War, the recurrence of certain specific bodhisattvas, the annals of 19th century French (and Swiss) crime, the fin-de-siecle anti-absinthe movement, and the World’s Fair of 1889, of course, whose final three days serve as the story’s squarest frame.

Inevitably, as I grew more familiar with the history, the place, and the various available characters, the book began to take on the romantic, ornate, gas-lit atmosphere of its setting. At the same time, however, and just as inevitably, I became aware that my actual storyline – that is, the investigation into the life and death of the Unknown Woman — was leading me down some very dark alleys, and that lurking in the shadows of this world were more sinister elements, specific exhibits of racism and acts of violence that were as grotesque and disturbing as anything the human imagination could conjure. Only they were true, indelibly etched into the record of the period.

I cannot say that this dissuaded me. For a writer, the knowledge that your present course is liable, at certain turns, to shock the conscience of an empathetic reader isn’t necessarily bad news. It means you may be on to something, in fact, and especially these days, when the ways we talk about our deepest communal faults and fault-lines have begun to feel so pitched and so prescribed, there’s value, I believe, to opening the mind’s eye and seeing these demons in action. And in effect. That’s what novels do.

So I proceeded, aware however that certain crucial questions were out in the open now, and would hover for the remainder of my effort – questions not just about how I should address the more upsetting features of this landscape, but about whether I should. And why.

Now in addition to being a writer, I am also a teacher, which means that I currently find myself in a moment of upheaval, wrought by the confluence of a technological revolution and a socio-political reckoning that calls upon us – happily and necessarily – to revisit the most basic questions about what we think we’re doing, which in my case means teaching literature. In the brave new world of boundless bandwidth and vanishing attention spans, what does it even mean to be a reader, or ‘culturally literate’? Is this an idea we want to preserve? Is reading novels, say, a behavior we want to continue encouraging? And if the answer is yes, then on what basis do I choose to model that behavior on this book here as opposed to that one there?

I’d like to think that all English teachers are wrestling with such questions, and I expect that our answers will vary, depending upon the paths that led us to the classroom, and the paths that led our students there as well. Obviously. But for me, and for now, my own answer to that last question in particular – what makes me most excited to share a text with my students, and to read it with them – is this, and if this sheds light on my creative m.o. or why I feel not just emboldened but obliged to take the hazardous trail when it presents itself…fine.

First, I should admit that I’ve never considered it to be the purpose of a novel – or a song, a painting, or any work of art for that matter – to offer remedies, solutions, or instructions. I’m aware of the counterarguments, but it’s my experience that ideology flattens art, and I’m not interested in agendas. I can get those easily enough online. When I smell one in something someone has created, my tendency is to think it kinda stinks.

What doesn’t stink – what stays fresh, that is, and what I, therefore, trust in most — is the Particular. The Singular. The One-and-Only-ness of whatever the writer has set their sights on. And that quality can apply to any aspect of the work – to the situation, a feeling, or to a character, of course – that’s always the best. The effect is the same no matter where you find it, though, and harkens to the old idea that the more precise the detail – or focus of our attention — the more universal the resonance will be. So it doesn’t matter that I’m reading about a Chinese farmer in a rice field 2500 years ago. If the language captures that moment, the moment will capture me, and in so doing, expose all those boundaries that supposedly divide that farmer and me for what they are: the real fiction.

But I’ll go a step further and admit that my favorite of these moments, the ones that really make me sit up in my chair, or maybe even put the book down and take a quick walk of gratitude – are those in which an author manages not only to distill the essence of the thing, but the antidote as well.

What do I mean?

I mean that passage where, even as the protagonist appears to be having their grand epiphany – is actually pronouncing the truth inside their head (and an admirable truth at that!) – the author manages to tilt it just a fraction, just enough to let us see that this too is vanity, of course, it is (e.g., Tolstoy, Woolf). Equally, as stirring is the lunatic’s street corner rant, which for all its frustrating loops and arbitrary digressions still glimmers with moments of divine light. This makes me very happy (e.g., Nizami, Nijinsky, Morrison, Kanye). That glance in the mirror reveals the villainy of the hero or the heroism of the villain. Anything, really, that challenges or confounds the reader’s reflex to make an easy sense of what just happened or to relax into obvious assumption about who’s reliable and who isn’t, or what the moral of this story surely must be (e.g., Shakespeare). I like a good kōan. I like the parable that makes no sense (e.g., Buddha, Jesus). I like the composer who, having written the most beautiful melody he can think of, can’t resist smearing it just a little with his thumb (e.g., Prokofiev, Waits). Or that author who for some reason saves her clearest, tenderest prose for the most gruesome image in the book (e.g., Allende).

These are my heroes, my mentors and masters, who teach me not to be so quick, or ever to think I know. All meaning is a double-edged sword. Ego cloaks itself in noble deeds every day. The lotus grows from garbage heaps. And literature is never more vital – or more consoling, it seems to me – than when it reminds us of this, the gorgeous moral ambiguity of human being.

Do I say all this to suggest that The Unknown Woman of the Seine actually achieves such an effect? Or to justify the paths I finally chose in trying to solve the mystery of that young woman’s face? Hardly. Not my place. Not my interest really. But I will happily admit that this is why I read; this is why I teach; and that by implication, sure, this is why I write.