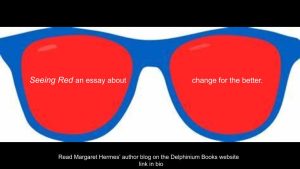 This is one of those times when everything seems to converge, when upheaval – war, pandemic, environmental collapse, scorching political unrest, racism, wrenching economic and social disparity – shines its searchlight not only on our world but on our lives. In crisis we either shut down — metaphorically pull the covers over our head — or go on high alert. We turn off the television and stop reading our newsfeeds and instead binge on the Gilmore Girls or on one British police procedural series after another or we scrutinize not just global events but our immediate environs and our daily interactions, taking a hard look. For some of us, perhaps in self-defense, this chaos brings an intensity to our focus on the everyday. And what could be more quotidian for a female than the subject of menstruation?

My granddaughter has just been “visited,” as they used to say well before my time, by her first period. An event marking personal change and disorientation in a world that is changing at a disorienting rate. My lens abruptly shifted from examining the overwhelming chaos around us to the more familiar chaos I imagine my granddaughter navigating through.

I mentioned to a well read and much-movied friend teetering on the brink of eighty that I was thinking about writing about menarche, expecting his patrician nose to crinkle and his forehead crease in the way I’ve observed when I have brought up topics he found distasteful. But instead, he encouraged me, saying he had never seen a treatment of the subject in novels or in film except in the horror movie Carrie, based on the eponymous Stephen King novel.

Now there’s a depiction of a girl in the throes of hormonal eruption/disruption that could arrest anyone’s development.

The title character is very much a late bloomer, retarded in her social and physical development, a senior in high school when she begins menstruation. Menarche comes upon her – overtakes her – while she’s at school. She is showering in the locker room when she discovers she is bleeding and panics, believing that she (rather than her childhood) is dying. Her classmates turn on her, reveling in her ignorance and fear, and bomb her cowering, naked body with a barrage of tampons and sanitary pads while shouting, “Plug it up! Plug it up! Plug it up!”

When that Brian de Palma movie came out in the 1970s, I was taken to see it by friends. I had no idea what to expect.  Sitting through that film led to a resolution that was easy for me to keep: never to read a book by Stephen King or see another de Palma movie. No fan of the horror genre, I also felt that this was a work of stark misogyny. I was repulsed not just by the “mean girls” trope, but by the girls in the film being depicted as sadists on a par with the forces of the SS. The climax of the movie shows two of these vile teenagers giggling as they jerry-rig a bucket of pigs’ blood so it will cascade onto the unsuspecting, white-gowned Carrie while she is on stage being crowned queen of the prom. (At least that’s the way I remember it these decades later. I’m not willing to put myself through a second viewing.) Seriously? As if the audience had not already grasped that puberty was the ruination of Carrie, unleashing forces in her (telekinesis, the ability to control objects with psychic power rather than by physical means) that will end in mass destruction. But a bucket of pigs’ blood? Did we – as well as Carrie – have to be hit over the head with the metaphor?

When I was ten years old, I went into our household’s guest bathroom, which was also the bathroom closest to the bedroom I shared with my aunt and the chamber the family called the “powder room” in those euphemistic times. On my way I observed my mother and her friend at the kitchen table talking and drinking coffee. When I emerged from the bathroom, trembling, I announced, “Mom, I’m hemorrhaging.” (I was a word person even at the age of ten.) I felt no embarrassment, only a sense of medical urgency. I was relieved the other woman was there as my mother didn’t drive and someone had to quickly transport me to the hospital. My words were greeted not by the concern and bustle I expected but by silence. Then my mother calmly told me to go back into the bathroom and clean myself and she would meet me in my bedroom. I was bewildered, but I obeyed. When I again came out, the friend was gone and my mother was sitting on my bed, something she never did in my shared bedroom. Next to her on the bed were laid out an enormous white cotton pad, some kind of strap, and a package insert on the proper way to wear a sanitary napkin. She told me that what I was experiencing was normal, that it would happen regularly, that it was something that happened to all girls. And then something preposterous about eggs, but I knew girls weren’t chickens. This was impossible to believe. There was no corroboration. At age ten, it hadn’t yet happened to anyone else I knew. But even at that age I was savvy enough to realize that normal was over, that this was something else.

And that was pretty much all my mother told me.

Life was so unfair. I had four brothers. I had no sister. Because I was a girl, I had to share a bedroom with someone forty years older. And now this. Regular bleeding from somewhere in one’s toilet parts that none of my brothers would ever have to experience.

And of course, I didn’t know the half of it.

In fairness, I must say that many of my contemporaries were not treated to a much better version of The Talk. And in my mother’s case, my early menarche – not to mention my startling announcement in the presence of a third party – must’ve been fairly discombobulating to a person who placed such a high value on discretion.

My mother was not one to indulge in conversation about either one’s physical or emotional interior. Her sense of propriety prevailed. One kept things to oneself. One didn’t recount one’s dreams (she was always turning down my offers to share mine). My mother didn’t engage in gossip and she didn’t mind silence. Restraint was a virtue that perhaps exceeded faith, hope, and charity.

Justified or not, I got my revenge over and over again.

As a teenager, I routinely punished my mother for her reserve. On the occasions when I was afflicted by my period and a young gentleman caller showed up at our door, I would find a way to work my current state into conversation. Going out for an afternoon at a Lake Michigan beach I’d inform the boy who’d come to collect me, “I’ve got my period, so I won’t be going in the water today.” I would delight in the ashen look on both my date’s and my mother’s faces. I talked about cramps (mine were bad and lent themselves to vivid description) and the heaviness of my flow. I could even introduce the topic in the absence of my period by reflecting on how in the days immediately preceding onset I would transmogrify into a clutz, dropping things, bumping into furniture. I’m sorry now for torturing my mother, but of course, it wouldn’t have been torture if we were able to comfortably discuss such things. If The Facts of Life were treated like facts of life.

I did a better job when my own daughters went through menarche, but I don’t know how much better. My older daughter used to stick her fingers in her ears and make lalalala sounds to drown out disgusting talk about the changes she could expect. Her sister was young enough to be intrigued rather than grossed out by the words her sibling was trying to keep from penetrating into her consciousness, so she probably assimilated what she needed to know well before she needed to know it.

While many parents today work purposefully to acknowledge and incorporate puberty into a holistic view of family life, menarche and the onset of bodily changes and the uninvited hormonal tides that accompany the menstrual cycle are still delicate, difficult subjects.

We think we have whisked away the cobweb of taboos, but even the ancient prohibitions remain with us. In Nepal, there is still the custom of chhaupadi where women take up residence in menstrual huts during their periods. The Quran forbids sexual intercourse during menstruation. Jewish law’s term for a menstruating woman, niddah, signifies one who is unclean. Traditional Hinduism teaches that menstruating women are impure and polluted. An international organization, Flo, that offers education and outreach to women, including supplying feminine hygiene products to women who don’t have the cultural or economic resources necessary to manage their periods, reports that many girls in rural India, Africa, and Indonesia drop out of school once they experience menarche. But this is not a third-world problem. Period shaming is still prevalent around the globe.

So I was delighted to learn that there is a new film — the anti-Carrie film?— just released by Disney — Disney!— that tackles the subject of female puberty. With Pixar animation! How cool is that?

I learned of Red Panda by way of hearing about an influential film critic who — if he did not exactly trash the movie — dismissed it. He couldn’t relate! Picture alternating emojis here: a laughing-with-tears face and an exploding head.

The summer I was eleven my father delivered me to the house of a classmate on his way to work and gave me my bus fare and a little extra for the trip home, so on my return, I stopped at the small grocery store wedged in near the bus stop to buy a pack of Black Jack licorice chewing gum. Inside, I crossed paths with two boys from the class above mine. I was able to summon the courage to greet them as I was dressed in one of my favorite outfits: slim white capris pants below a boxy, beribboned crop top that stopped at my waist. The boys snickered in reply. The only other shopper was staring at me. I looked down and saw what they saw: the patch of red blooming against the white. I dropped the gum and ran out of the store. I still had to wait there, exposed on the street corner. I still had to board the bus, ride the bus, and walk the unbearably long mile home from the bus stop. I was dying. Not from hemorrhage, from shame.

My daughter tells me that I will be relieved to learn there is now Period Underwear that protects the wearer – everyone’s granddaughter — from such ignominy and she is right—I am very happy to hear it.

And I am looking forward to seeing Red Panda with my granddaughter.