New York City, where I’ve lived for decades, has been, for me, an endless source of inspiration for my novels and short stories. The things I’ve seen and overheard—while in line at Whole Foods or while sitting in the waiting room in a doctor’s office or standing in a subway car next to a teenager watching a TV show on his phone—have often found their way into my fiction. The shoes my characters wear, the tattoos ornamenting their wrists or ankles, the frustration they unleash as they shout into their iPhones at friends or relatives who’ve disappointed or angered them—sometimes nearly every bit of it has been inspired by people sitting across from me on the Lexington Avenue bus. Or walking past me along 86th Street, phone in hand, as they reveal surprisingly intimate details of their lives in the loudest of voices. And my natural instincts as a fiction writer always lead me to pay close attention, to write down whatever I find poignant or hilarious or astonishing directly into a small notebook I keep with me whenever I leave my apartment. As the T-shirt given to me by a friend warns: 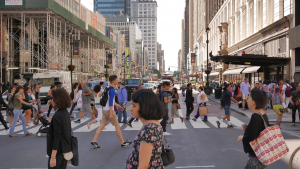 The idea for my new novel, The Blackmailer’s Guide to Love, came to me in an instant one spring afternoon eight very long years ago, as I was heading homeward from the subway. I was less than a half-block from my apartment when I saw, for the first time in precisely forty years, a man I recognized immediately, a former college teacher of mine who looked rather as he had when I’d been his student, though he was now an elderly man, his hair thinning and white, his formerly bearded face now mostly clean-shaven. And in that moment I thought, I know what you did, Professor X. I KNOW what you did.

Then I stopped him on the street and introduced myself. I’d been his student decades earlier in the philosophy class he taught and, as I could have predicted, he had no idea who I was. But we chatted for a few minutes about our mutual time on campus, and talked about what a coincidence it was that, in fact, we now lived directly across the street from one another, our apartment buildings a mere fifty feet apart.

What I knew was that forty years earlier, this geeky-looking married guy had been sleeping with a sophomore in my dorm, a serious-minded teenager who was a student in the small ethics class Professor X had taught in the Philosophy Department.

In the next moment, as we went our separate ways, the earliest seeds of my new novel were planted. What if my protagonist/narrator (a bereft, emotionally unstable middle-aged woman who’d once been the professor’s student) strolled into the lobby of the professor’s high-rise apartment building, talked her way past the concierge, went up to his apartment, and rang the bell? What if the professor’s wife—to whom he’d been married for over half a century and who knew absolutely nothing about her husband’s betrayal—answered the door, and the former student announced, “You don’t know me, but there’s something I have to tell you…” What would it do to this couple’s relationship, to the betrayed wife who had never doubted, for even a moment during their fifty-year marriage, her husband’s faithfulness? Or…what if, instead, the narrator confronted her former professor and threatened to tell his wife unless he immediately wrote her a check for five thousand dollars? And a few months later demanded ten thousand? And then twenty thousand? How far would he be willing to go to preserve his marriage?

Though I wasn’t at all sure where, exactly, these ideas would lead me, the one thing I knew with certainty that afternoon after running into Professor X was that somewhere in that briefest of encounters was a novel I was going to write. And I found myself thinking, as I do nearly every day, of my favorite quote from Mark Twain: “There was never yet an uninteresting life. Such a thing is an impossibility. Inside of the dullest exterior there is a drama, a comedy, and a tragedy.”