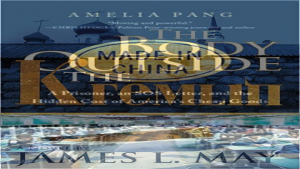 I find my urge to disbelieve in concentration camps, and in what is done to the people in them, is quite strong. Maybe “disbelieve” isn’t quite the right word. We call reacting to made-up events and people as if they were real, the way we do when we read fiction, “suspending disbelief.” What I’m thinking about is the reverse of that: I’m perfectly capable of acknowledging horrible truths about concentration camps, but I can hold them in my mind as though they were fictive – I can read about real, suffering humans as though they were characters with no claim on me. So, the urge isn’t to disbelieve, exactly: it’s to suspend my belief.

You would think, having spent the better part of a decade writing a novel set in the Gulag, I’d have pretty well exhausted this urge to ‘suspend belief’. I regret to say I haven’t. The years writing and researching The Body Outside the Kremlin trained me to believe deeply in the history of the Soviet camps (at least enough to fictionalize them; more on this below); still, I had to endure the process again last week as I read Amelia Pang’s Made In China: A Prisoner, an SOS Letter, and the Hidden Cost of America’s Cheap Goods.

Pang’s book is an overview of China’s laogai system of “reform-through-labor” camps, woven together with the story of Sun Yi, a laogai prisoner who managed to smuggle notes describing the conditions of his imprisonment into the products he was forced to manufacture for sale in the US. When a K-Mart customer finally found one of his letters in her Halloween decorations in 2014, it led to a modest amount of national coverage here in the states. This certainly isn’t a review, but I can say it’s a good book on an important subject, worth the read for anyone. Even so, I think it must have taken a hundred pages before I stopped quibbling doubtfully with it as I read.

Quibbles such as: Well, Sun Yi was a falun gong practitioner, and aren’t they notorious for supporting ultra-rightist causes? Pang had even written for the falun gong newspaper, the Epoch Times, home to some of the US’s most noxious Trumpist conspiracy-mongering. Were she and her subject really so credible? And later, Pang’s points about the US consumer’s culpability in creating the conditions that made Chinese forced labor profitable: Was I supposed to believe that my choice of t-shirt really had critical moral consequences? Am I really guilty?

I expect anyone who’s read a well-sourced book that pushes them to reassess their own comfortable place in the world will recognize my pseudo-arguments. They’re deflections, ultimately beside the point. Whatever you think of falun gong’s commitments, it’s undeniable their practitioners are brutally repressed in China. By the same token, worrying about the Epoch Times’s credibility ignores Pang’s solid journalism. In the end, whether you believe in the efficacy of consumer activism or not has no bearing on whether US consumption drives laogai labor practices. It does. That’s a fact.

So why didn’t I want to go along with Pang’s book? Where does the urge to ‘suspend belief’ come from?

Partly, it’s a kind of horror-fatigue. My wife joked, after Kremlin was published, that she was relieved we were finally being released from Solovetsky, the camp where it’s set. And it really has felt like a liberation to move on to other research, other stories. It used to spoil my appetite to imagine the consequences of starvation for Russian prisoners: night blindness, pellagra, death by heart failure. My appetite is gone again as I think about what happened to Sun Yi when he started a hunger strike: The guards at his laogai cuffed him to a bed by his wrists and ankles and force-fed him salty millet through a tube run through his nose and down his throat. This lasted for months. When they finally removed the tube, Pang reports, the part that had hung down into his stomach was black.

Cheap irony that one set of camps tortured with starvation while the other tortures with feeding. (Not that laogai prisoners are fed particularly well when they’re not hunger-striking.) But for the most part laogai and Gulag regimes are uncannily similar. At times, I felt like I was going down a list of details the two had in common. Prisoners sleeping head-to-toe to fit into the tiny space they had to lie down? Check. The maddening difficulty of working while holding your pants up when you’re forbidden to have a belt?  Prisoners mutilating themselves with tools to escape impossible work quotas? Check and check.

Easier to turn all of that into a litany than to stop and dwell on what each item means for you if you are imprisoned. That’s what I mean by horror-fatigue.

Pang spends a couple of chapters discussing the ways that the moral and cognitive burdens that the laogai system imposes on US consumers keep them from grappling with their responsibility for it. I won’t rehearse her arguments here, but I know this is part of the urge to ‘suspend belief’ as well. Like most people, I don’t like to feel guilty, but I don’t like to have to work too hard to avoid guilt either. If I don’t force myself to think about it, allowing what I know about laogai to float into the fictive zone of my mind conveniently excuses me from having to do either.

So far the feelings I’ve described could apply to anything horrifying and morally uncomfortable, but I do, finally, think that the ‘suspension of belief’ is particularly relevant to our experience of the camps. Certain basic facts of their structure render them dream-like, otherworldly. They are often remote, and when they aren’t (as is often the case for laogais, which need to be more or less convenient to manufacturing centers), they are at least inaccessible. Within them, the usual rules of life are suspended, as in a dream or a game. A prisoner might, like Sun Yi, find that the only way to object to his captivity is to starve himself or to slip a note into a package of Halloween decorations. He might, like my character Tolya, find that the only way to investigate a murder is to cut off his little finger. Or she might, like so many, find that regardless of how much she would like to sleep, she continues to do hard labor for eighteen hours a day, day after day. One of the things I find hardest to make real to myself about the camp experience is just how little a prisoner’s daily routine is influenced by their intentions or desires; we’re accustomed to thinking of human activity as an index of human mental states, but the evidence of the camps is that that need not be true.

Distance and strangeness push camps away from our usual sense of reality and into the realms of fiction. A concentration camp is a frozen planet, a city of ghosts, an x-zone, a dark kingdom under the hill. And to live under a regime that sends people away to them is to live with the threat that your reality might dissolve into such a state-sponsored fantasy at any moment. That assault on your sense of what’s real and what isn’t, so that you learn to suspend your belief in everything until the state has endorsed it — that has to be part of the point.

Writing The Body Outside the Kremlin always felt both important and morally hazardous to me. Important because I, like most people who love fiction, still believe in its power to be true in ways that make reality more real, ways that might be able to fill life back up when concentration camps and other systems of repression drain the reality out of it. But always hazardous as well, since for all my research and cultivated sense of Solovetsky’s truth, I was also creating a fictional version of the place, turning it into an outpost of my imagination. There’s the risk, doing that, of turning a camp back into one of those realms of fiction. You might make it a dream for your reader, or a game, in ways that mirror the totalitarian project you began by condemning.

I could say that I hope The Body Outside the Kremlin affirms reality as only fiction can while succumbing to moral hazard as little as possible. But that just amounts to saying that I hope it’s a good book, and the time for me to make that judgment is well past. Instead, I’ll say I’m glad Amelia Pang wrote her book, and that Sun Yi managed to get his note out. It’s healthy to be reminded how strong the urge to ‘suspend belief’ can be.