From a writer’s perspective, the line between fiction and nonfiction, between memory and invention, between facts and the blurring of facts, is continuously diminished or dissolved, and most of the time I don’t think it matters. I love the documentary that has heightened the frisson to bring me closer to the screen, has recreated what “might” have happened even though no investigation has established that, because my brain, like most people’s, needs the caulk between the bricks, and will fill in the spaces regardless of what is there. Of course, I will be angry, say, if my bank similarly pads my account with pieces of paper that are not actual currency, or if a restaurant serves me a plate full of plastic food instead of the edible ingredients promised by the menu. Rationally, I understand that there must be a line between what-is and what-is-not. And I usually know where it is. 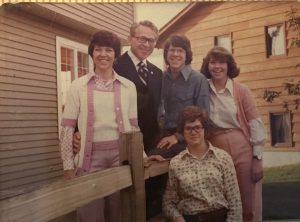 However, when things come partially from my own memory, I have stood in front of my mother and made her repeat a childhood incident over and over, and I have told her how I remember it differently. At first. If we call in my brother or my younger sister, they, too, will first latch on to versions that sound as if we were not only born in separate families but other countries. But eventually, each one will own up to the similarities, the shared threads, and we reach points in common.

It’s really a problem of polish. I admire anyone who can take the facts and give them a little Ken Burns spit ‘n shine, but my facts always needed garnish, too. I am a baker who likes frosting, and while we’re at it, let’s add sprinkles, and if there are going to be sprinkles, why not in many colors?

Aware of what I considered that failing, I started Little Miseries as a piece of literary journalism. I wanted it to be just the facts. I thought that to frost those memories, to finish out this metaphor, would be to trivialize them. I had only to tell the truth about my childhood in a way that would not harm the living or smear the dead, and still be compelling.

And that was the first draft. As it met its readers, the first being my agent, Mary Krienke, I saw the book’s flaw. There must be a hero, and it did not have one. In fact, the real Kim in my childhood was looking everywhere for the hero, and that was the point. The gnawing realization that we children were alone in the universe despite fawning adults, or because of them, was one none of us wanted to face.

In subsequent drafts, I became less of an observer, quaking behind almost closed doors, reporting on awful things, full of curiosity, and had to find someone in the book to act. My editor, my agent, the publisher, the assistants—people who loved the book and loved me—they were aching for the hero and the heroic act. The moment of salvation. The calvary. The saving of everyone. They needed it. They needed me.

So I had to blur the line between fiction and nonfiction once and for all and recall and then write out—and possibly exaggerate—all the tiny little rebellions of my childhood, the sitting in the car for hours at cemeteries, refusing to honor a grandfather I despised, and getting spanked for running away from hugs that made me nauseous. I had to embellish the moment I tripped my grandfather, who was already drunk, and might have tripped even if I hadn’t helped out, and the day when I hid his keys to the cash register at his hardware store so he couldn’t open the shop. It meant my grandmother could keep having coffee with my mother and laugh for another half-hour in our kitchen. I had pull out as if it was a daydream, but it was real, the day I whispered “Fuck you” under my breath in church, praying no one and everyone would hear. Notice the lack of Calvary’s trumpet? I know. I know.

In this year before publication, of the truths and half-truths stitched together from memory and wishful thinking, I had hoped my family and I would find a way back to one other, but we are actually more estranged than ever. They think I’ve said too much, and I think I haven’t said enough. From a writer’s perspective, the line between fiction and nonfiction is only as thick as the facts that support it. I owe my sister, my family, more than paper and ink. But the fog has not lifted for them, and I’m afraid to be swallowed up by their pain, and so, instead, with the only perspective I have, I write.