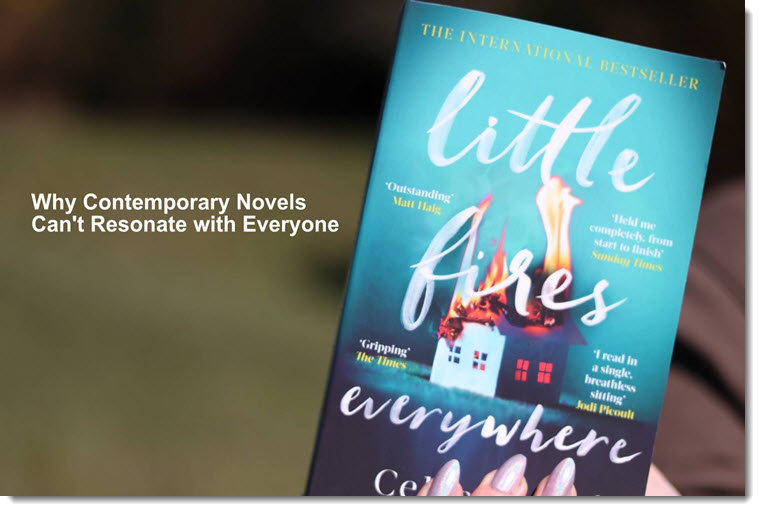 Is it possible to write about a book you’ve read and didn’t viscerally respond to without discouraging that book’s other potential readers? Is it possible to recognize a book’s many qualities and still say that your experience reading it wasn’t exactly satisfying? I am going to try and do this with Celeste Ng’s novel Little Fires Everywhere, a book that has been highly praised, both online and in newspapers and has managed also to be a bestseller and seems to be a favorite of many people.

Ng is a fine writer. She tells a compelling story, and at the center of Little Fires Everywhere is a provocative moral dilemma. This novel—her second— is, for these reasons, impressive.

But as I was reading it, I kept thinking: this is a novel that perhaps won’t appeal to men as much as it will appeal to women—and I don’t think this is criticism as much as it is an observation. I will say, however, that a fine novel should appeal to everyone equally. A fine novel’s concerns should, even in its specific circumstances, have a universal resonance. And this is why, for example, a Jane Austen novel has passionate fans of both sexes.

As far as Ng’s novel goes, I’ve tried to analyze my reaction to it, to figure out why I didn’t really connect with the book, why I found myself growing restless with many of the scenes. Ng graduated from an MFA program, and as a former MFA professor, one thing I know: contemporary students of writing are taught that what separates literary fiction from general-interest fiction, is the attention to detail. Before sitting down to write this, I opened a historical novel that has 8,000 Amazon reviews and started reading. The details were there, but they seemed like generic details. Ng’s details, on the other hand, are fresh and original. There are just a lot of them, too many for me, but obviously not too many for all the people who love the book as well as the newspaper editors who selected it as one of the “best books” of 2017.

At the end of the day, or perhaps I should say, at the end of the page, I realize that it was the characters in the novel that I couldn’t relate to, characters who seemed more like types than fully fleshed out individuals. The teens that inhabit the book seem like typical teens; there is nothing really striking about them. And the adults also seem to be drawn in a general way. Indeed, although the novel weaves in and out of various characters’ point of view, I never felt I got to know anyone intimately.

Now, of course, this is just one person’s opinion, and I often say that books are written for the general reader and not for other writers, and it could well be that my experience with this novel is, by comparison to the reading experience of most of its other readers, an anomaly. I’m bending over backward here to give this book the credit it truly deserves. But I just was never fully engaged. Yes, it may be because I am a male reader, but I expected more than I received.