Crying in the Park, Climbing in the Window: Two images helped me imagine the story of a woman scientist

When I was a young woman trying to figure out how to be a mother and a writer, I read an interview with cosmologist Vera Rubin. In 1951, after completing a master’s degree in astronomy, Rubin moved to a new city because of her husband’s job, giving up her studies to care for her newborn son. It was a hard time. She loved her baby, but she was lonely. She missed science.

Rubin’s lifeline was the Astrophysical Journal. When it came in the mail, she would take it to the park, pushing her son in his baby carriage, then sit on a bench and read it, weeping.

Eventually, Rubin figured out how to get herself into a PhD program. Twenty years after that, she discovered that the universe largely consists of dark matter, an insight that transformed our understanding of the cosmos. Ultimately, Rubin had a successful and celebrated career. But the image of the young mother with the baby carriage reading an astrophysics journal through her tears remains burned into my mind. 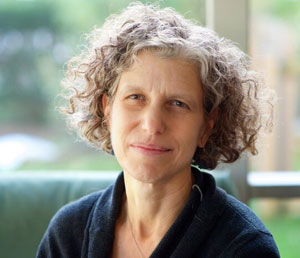 When I was a kid, I wasn’t interested in science. My father, a molecular biologist, would sometimes take me to his lab on Saturdays. Mostly I played with the paper clips in his desk. Other times he would take me into our Maryland woods and show me butterflies, wildflowers, and the dam a pair of beavers built across our stream one year. I would lag behind, impatient to be back inside: to trade the palpable world for the imaginary ones inside books.

Nonetheless, scientists interested me. Or maybe it was the idea of scientists: how they burrowed underneath the skin of the world to find out how it worked. Their seriousness of purpose stirred me. I read the books my father had read as a boy that had helped inspire his interest in science—Sinclair Lewis’s Arrowsmith and Paul de Kruif’s Microbe Hunters—and came away with a romantic notion of a Life Dedicated to Truth. But in high school science classes, as in the woods, my mind often drifted.

In college, I met a boy who loved stars. We got married when he was in astronomy graduate school, and suddenly there I was, surrounded by scientists again! I had never wondered why so few of my father’s colleagues were women, but now I was struck by the fact that my husband’s classmates and professors were almost all men. What was up with that?

Of course, women have long faced obstacles in many professions, but there is something particularly galling about antagonism to women in a calling that’s supposed to be about objectivity and the pursuit of truth.

It’s also interesting. It occurred to me that the travails of a woman scientist might be good fodder for a novel. I started reading, trying to see what I could learn.

There are lots of compelling (infuriating!) stories about women scientists who struggled because of men. Cecilia Payne-Gaposchkin’s discovery of what stars are made of was initially disbelieved, and the man who discouraged her from publishing her result was later widely credited for the breakthrough. Rosalind Franklin’s x-ray photograph of DNA was used without her knowledge by the men who later won the Nobel Prize for solving the molecule’s structure. These women, and others like them, overcame many obstacles to bring us truth from the far reaches of the galaxy and from inside our infinitesimal cells. How did they do it? What sustained them?

One morning, reading the New York Times, I encountered the obituary of a geneticist I had never heard of, Barbara McClintock (1902-1992). One paragraph in particular caught my attention:

Modern genetics has known no figure quite like Dr. McClintock, who worked alone and chose not to publish some of her revolutionary observations for years, explaining later that she thought no one would accept the findings. She never gave lectures, as most scientists do to build their careers. Instead, until her last days, she worked in her laboratory at Cold Spring Harbor twelve hours a day, six days a week. Until 1986, she did not have a telephone, requesting that anyone who wanted to talk to her write a letter instead.

I clipped the obit and put it in a file. I didn’t think I knew enough yet to write that story—not enough about novels or science or life. That would take a couple of decades.

In 2014, I finally felt ready. To prepare to write the novel, I did a lot of research about McClintock. I read biographies, had conversations with scientists (including my dad), and visited archives. One moment from her life particularly stood out to me: as an assistant professor at the University of Missouri, McClintock once climbed into her office through the window because she’d forgotten her key. Somebody saw her do it, and she got in trouble, apparently because it was considered unladylike.

I could see the scene so vividly: a slight, strong woman clambering up a stone wall on (perhaps) an early Sunday morning. Tackling the problem at hand in an effective, unconventional way! That scene was one of the first I wrote. During revision, though, I realized I had to cut the whole Missouri section. That was okay (you always have to cut), but I hated losing that scene.

A few drafts later, I decided to begin the book with the main character wandering the streets of Ithaca, New York, late at night after an ill-conceived and alcohol-fueled kiss with her housemate, another girl. Where would she go at such an hour? I followed her across campus as she tried various locked doors, lugging her heavy suitcase and her shame.

When she got to the biology building, its door was locked too. She looked up to the classroom where her bio lab met, and I thought: What if the window were slightly open? What if she decided to climb up? Transformed, the anecdote from Missouri became just the tool I needed. (The metaphoric overtones—that a woman may need to find an unconventional way into a male-dominated field—did not occur to me until later.)

In the course of writing a novel, it’s often some indelible picture stuck in your head that gets you going, or that helps you through a dark wood when you’re stuck. The woman climbing in through the window helped me solve a problem and gave me an opening chapter. But it was the image of the young mother reading the physics journal and weeping that started me on the journey. I could not have written In the Field without both of them.