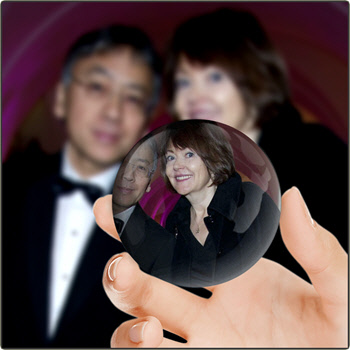 When I heard the news that Kazuo Ishiguro won the Nobel Prize for Literature, I was delighted. Not only is “Ish” (as everybody calls him) a wonderful writer, from my memory of my London days, he’s a decent down-to-earth-guy, confident but humble – a far cry from the stereotype of the egotistical writer.

But perhaps more than anything, I want to say that I think he made a great choice with his wife, Lorna MacDougal, a Scotswoman. She struck me to be smart and no-nonsense.

She was just the sort of person who’d hold the mirror up to her husband when it was necessary, somebody hardly cowed by the specter of fame or international renown.

According to the Telegraph, MacDougal read eighty pages of the first draft of Ishiguro’s latest novel, The Buried Giant, and told him quite bluntly, “This will not do.” She told him he needed to throw out what he’d written and begin again. He was taken aback and was derailed for quite some time, but did begin again and later, grateful that his wife had intervened.

There are many spouses who are intimately involved in the evolution of an author’s work. Another good guy, my colleague at NYU, was Peter Carey, an Australian novelist who has twice won the Booker Prize and whose wife, Alison Summers, for the twenty years they were married, meticulously read every single draft of Carey’s novels and gave him extensive suggestions and commentary.  Another humble man, Carey gave his former wife effusive credit for her help.

Sometimes, though, a husband or a wife’s editorial contribution to their spouse’s literary output is not so openly acknowledged. In a Delphinium title, She Read to Us in the Late Afternoons, that will be published later on this month, Diana Trilling admits to our author that some of the early work of her late husband, Lionel Trilling, writing that bore her extensive editorial comments, was not among the papers that he left behind. I remember when I first read our author’s manuscript and getting angry with the idea of someone trying to veil his wife’s loving contributions to his work and saying to myself, she was just as good a writer as he was, but the difference between them was that she dedicated herself to him (and not visa versa) – perhaps to her own detriment?

Now I will need to stop naming names. But during the last ten years, a memoir was published that was critically acclaimed and became a bestseller. Before she published her memoir, the author was a middle-of-the-road journalist of no particular distinction. But she was married to a fine writer, a respected writer. When some of this woman’s former magazine editors read her memoir, they insisted that she could not have written it without an enormous amount of help. And yet there is nothing to suggest this. Of course, it’s hard not to acknowledge the irony of great writers like Carey and Ishiguro being gracious enough to thank their spouses for all their help; whereas the author of the acclaimed memoir couldn’t bear to acknowledge the editorial hand that very possibly took something mediocre and made it fine.