When a Book Idea Demands a Larger Stage 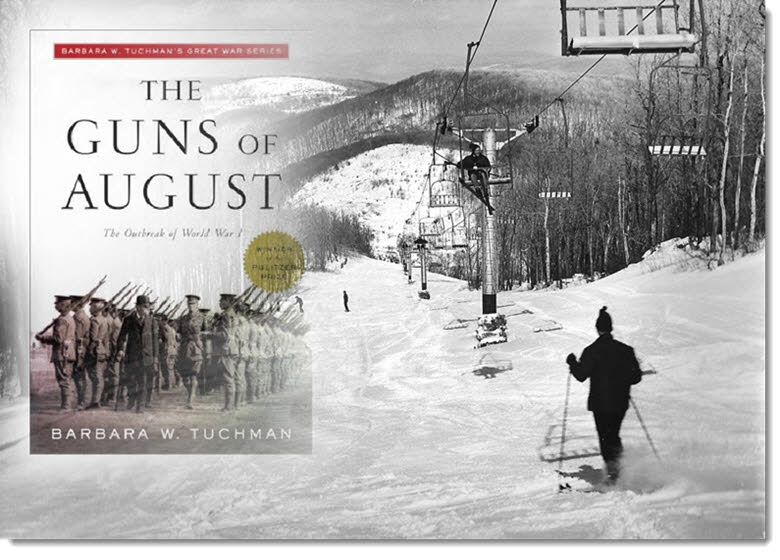 The Guns of August by Barbara Tuchman is considered by many World War I experts as a must-read for anyone interested in the geographic chess game that led up to what is arguably the greatest war the world has ever seen. The book’s wide scope combined with a riveting narrative is perhaps what makes it stand out among the drier, more academic World War I books. Leaving the story of the buildup to World War I to Tuchman, it’s fascinating to read up on how the author came to write the book.

I was especially intrigued to learn that the idea itself gestated while the author was on a week-long skiing trip to Vermont, where I happen to live and ski. Tuchman, like many writers, discovered that time away from the desk and doing something unrelated to writing sometimes frees up the mind immersed in a day-to-day routine that can prevent deeper thinking from surfacing. Any self-examining writer will tell you that the process is constantly engaged, a book or an article or a poem constantly writing itself 24/7 until the author believes that it has been properly executed. So, too, is the genesis of the idea that leads up to the decision to tackle a certain subject.

While Tuchman came back from Vermont with a general idea of what would become her great work, she credits her editor at Macmillan Publishing with giving her the confidence that she could broaden this idea into multiple narratives and points of view. I can relate this to what I do as an editor when I try to convince a writer that the work itself is demanding a larger stage; the best example of this is when I sense that a brilliant short story wants to become a novel. Many writers like Tuchman begin their process with a more narrow vision of what they feel will be a book, and it falls to savvy people around them who can approach their idea with complete objectivity and help them see the possibility of a broader horizon.

Here is another blog post that you may find interesting.