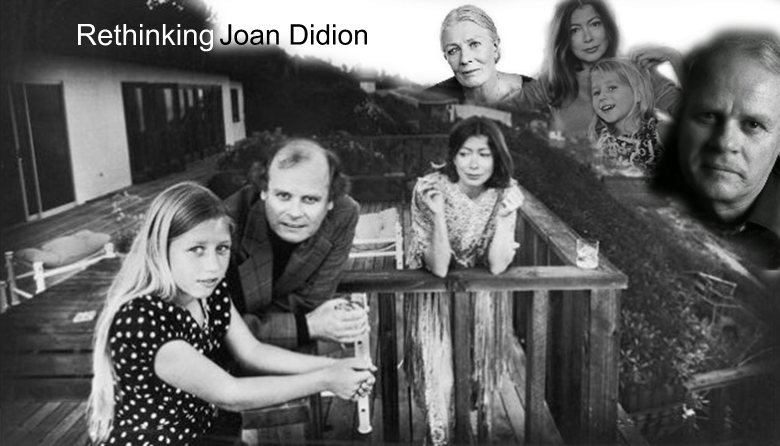 When Joan Didion published her memoir The Year of Magical Thinking, I avoided reading the book. I am a Joan Didion fan and eagerly read the excerpt from the book that appeared in the New Yorker before The Year of Magical Thinking was published. Didion, who lost her husband and only daughter within a two-year period, certainly had compelling material at her fingertips.

She was married to the novelist and journalist, John Gregory Dunne, and for many years they were known as a premier literary couple.

I was a bit put off by the excerpt in the New Yorker because (I felt at the time) while describing the harrowing experience of seeing her husband die suddenly and unexpectedly, Didion ladled into her narrative the names of many famous people, and the effect on me was: she’s telling me about grief while at the same time name-dropping. Didion and David Hare adapted the book into a successful Broadway play that starred Vanessa Redgrave playing Joan Didion. I never saw it.

My thinking about that excerpt and the book itself changed when I recently saw the touching documentary on Didion’s life directed and written by her nephew-in-law, Griffin Dunne. In the documentary, the author’s fragility is very much on display, and she is portrayed as alternately stoic and vulnerable. It quickly becomes clear that when Didion and John Gregory Dunne reached preeminence during the sixties, the literary world was different. It was more sparsely populated, and writers and movie stars and other celebrities mixed more freely and easily than they do now. It made sense that Didion established and maintained long-term connections with a large cross-section of people in the entertainment industry, that her life was populated by these people. And in fact, Didion knew and was intimate with Vanessa Redgrave long before Redgrave starred in the Broadway production of The Year of Magical Thinking. One of the most touching scenes in the documentary is of Didion and Redgrave going through a photo album together, Redgrave musing on the death of her daughter, Natasha Richardson, Didion nodding sadly as she reflects on the death of her own daughter, Quintana Roo.

Now that Dunne’s documentary has given me a better understanding of the author and what compels her to write, I am anxious to read The Year of Magical Thinking as well as the subsequent memoir, Blue Nights in which Didion painfully ponders her daughter’s death.