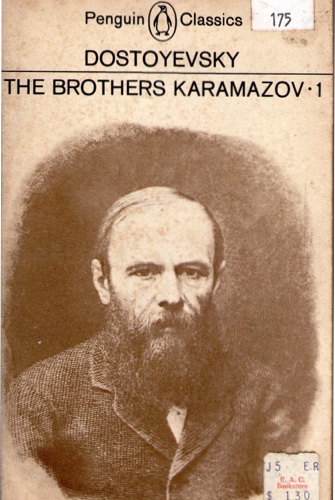 Many novelists shut down on reading fiction while they are at work on a book. Some fear that the voice of an author whom they admire might influence their voice, thereby weakening its sound and effect. I am the opposite. I feed myself good fiction like high quality protein powder. Great writers like George Elliot make me aspire to write at the height of my own capability, make me hope that I can turn pages of a manuscript into something that’s at least good. I remember the struggle I had writing my first novel and how reading Member of the Wedding helped me establish my own voice. One of the masterful strokes of that novel is the cadential song of its prose.

I recently returned to Dostoyevsky after many years and to The Brothers Karamazov in particular. As I often do with these classics, I read the novel and listen to the audio book simultaneously. Being read to by a professional actor is one of the great pleasures of my life. And I like to imagine that I will be listening to a book — perhaps the last chapter of The House of Mirth — as I go out.

This novel is the story of the three — well, actually four if you count the bastard Smerdyakov — brothers in the Russia of the mid nineteenth century. That the book seems oddly contemporary of course attests to its timelessness. The novel deals with questions of faith and atheism, but it also treats that rage and jealousies that can develop between parents and children, a difficult subject that many writers have avoided.

For me, the difference between Dostoyevsky and most other writers, including Tolstoy, is Dostoyevsky’s obvious passionate nature, his big heart and the fact that all his characters are, in some manner, also passionate people who, at some point or other, come close to the edge of insanity. This could be called the Russian temperament, as opposed to the European temperament, and this distinction is very clearly brought out by the famous defense attorney Fetyukovich (based on Vladimir Spasovich) who laments that the Russian soul is being eclipsed by European ways and customs.

I am of of eastern European lineage, have Russian ancestors, and I wonder if this is why Dostoyevsky’s writing, while often unsettling, gives me a sense of comfort as would a family gathering where things get out of hand and there are temporary arguments and disagreements but it’s understood that everything will come right in the end.

I’d long since begun my novel-in-progress when I began to read The Brothers Karamazov. As I got deeper into that book I began to wish that there was a way that I could bring (at the very least) a mention of it in my own work. Eventually I realized that I’d already created a Dostoyevskyesque character, a young man who suffers a brain injury playing hockey and in the aftermath of his injury feels either overly passionate and intense or completely disconnected. Eventually I found a way for another character to give him a copy of The Brothers Karamazov and for him to realize that, nearly 200 years ago in the 19th century there lived a writer who instinctively understood men like himself.