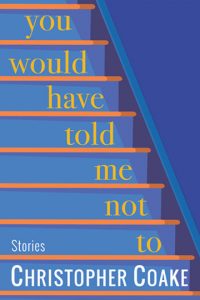 When I first submitted this manuscript to Delphinium, it looked a bit different. It was titled Big Guy (after the closing novella), and it contained two stories that were a little shorter than some of the others, but which I felt fit with the book’s primary theme at the time: the effects of toxic masculinity on men and women alike. They were both grittier and more abrupt than the others, and both featured male protagonists. Joe Olshan liked the book, but rightly identified that those two stories weren’t—well, they weren’t as good as the others. They didn’t go into particularly complicated emotional territory. That was what I needed to hear, honestly, and it was a clear sign that Joe was the right editor for this book.
Joe asked me to make a couple of big changes before publication. First, he wanted to change the book’s title to You Would Have Told Me Not To, after the title of his favorite story. He also wanted me to write two new stories that would replace the weaker ones. What I came up with were the stories “Her Kind of People” (about a young woman in an uncertain relationship who’s working as a server at a wedding reception, where she overhears two of the guests discuss the regrets they’ve had about their own marriages); and “This Will Come as a Surprise to You” (which begins with a new mother in her 30s unexpectedly encountering her abusive ex-husband, and then learning that he’s both sober and engaged). These stories came about in part because of the change of the book’s title, which allowed me more thematic room. “This Will Come as a Surprise to You” in particular was a surprise to me; I’d originally wanted to tell the story from the ex-husband’s perspective, but whenever I did, his ex-wife Lisa—with her knowledge of all his bad behavior—became a kind of antagonist, a threat to his new marriage, which is absolutely what I didn’t want. I came to understand that I’d have a much better and richer collection if I could find a way to tell the story of their marriage through Lisa’s eyes, and to show that—no matter what steps her ex has taken to reform himself—Lisa still carries enormous damage with her, damage that guides the way she lives her second husband and infant son. The book became less hyperfocused on men and their regrets, and became more clearly a book about how damage ripples through a variety of relationships over time. I’m very proud of both those new stories, and grateful to Joe for pushing me to make each better and deeper as he looked at them in draft form.