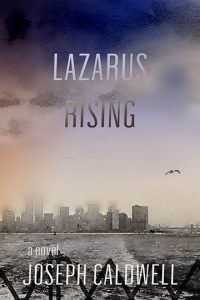 When I talk to anybody about my forthcoming novel, Lazarus Rising, I say that had I not written my memoir, In the Shadow of the Bridge, published last year, I would not have been able to write Lazarus Rising.  In the previous book, I wrote about my extensive and intimate experience of the AIDS epidemic, about volunteering at Saint Vincent’s Hospital to take care of nine people who died, plus my lover.  In this way, I was able to re-immerse myself in the epidemic.  Once I finished In the Shadow of the Bridge, I went back to a novel that I had written ten years ago and put in a drawer— because I couldn’t make it work.  When I wrote the novel originally, the situation was the same as it is now in the published book.  Then as now, I tapped into my rage against the AIDS epidemic, a rage expressed in the book’s epigraph.

When I originally conceived of Lazarus Rising, I wanted to expand the general experience of the epidemic and not limit it to the gay community.  I came up with the idea of a painter, a feisty woman who ends up becoming a drug abuser and gets infected by sharing needles.  And then I tried to imagine a man who would be the most interesting yet the least likely person she could be involved with.  I came up with a New York City firefighter, a young, passionate Irishman called Johnny Donegan. The way I write, I present an idea to my imagination and then it either works for me or it doesn’t.  Ten years ago it didn’t work and that’s why I put the book away.  But recently, when I went back to it, I saw something very important in the earlier draft that I didn’t make use of: that the main character was responsible for the death of her new-born son, that she participated in his death because of her infection that she passed on to him.  And once I realized this, I was able to go back and rewrite the book that is published on December 1, 2020, World AIDS Day.

I’ve been asked to frame the AIDS epidemic in two ways. The first—is there any kind of redemption that has come from it, any silver lining?  And I answer that there is none.  Nothing redeems the suffering of the epidemic.  Nothing good came of it.  I wrote my novel in a rage against people who thought there was or would be anything that redeemed the suffering.  When my main character takes a ferry from lower Manhattan to Staten Island, she thinks about all the things that could happen to her before she dies: seizures; dementia; pneumonia, incontinence.  She reflects that, with the nature of the disease, one never knows when any of these things will happen.  And Johnny, the firefighter who falls in love with her says, “If it took the epidemic to bring us together, we never should have met.”