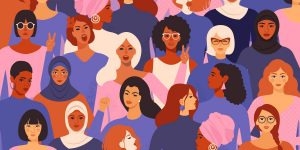 Last week during the American Vice Presidential debate, the Democratic nominee Kamala Harris said five magical words in response to Mike Pence’s constant interruptions during her responses: “Mr. Vice President, I’m speaking.” There were no apologies; there was no equivocation. Kamala Harris was clear she had the mic and she was not going to be interrupted. Every woman who has had the experience of being overridden, shouted down, or simply ignored because of her gender, clutched these words to her chest and cheered. It’s no wonder this moment went viral as it plucked a resonating chord in the hearts of so many women who have, all their lives, been longing to be heard.

Women’s writing is an extended version of Kamala Harris’s statement. When a woman writes, she is speaking. Her voice must be listened to as you read her words. There is no question of interrupting, of mansplaining, of telling her that you know better than she does. She is the authority; the story is her domain. I’m reminded of this as I think back on three pieces of women’s writing with voices so authoritative, so self-assured that all I could do was listen and be astounded.

The first is last year’s Booker winner Girl, Woman, Other by Bernardine Evaristo. This book, about contemporary life in the United Kingdom for Black British women, is told from many women’s viewpoints and yet the voice speaking is always Evaristo’s, warm and witty behind the scene. How inspiring to read as a woman masterfully controls a narrative which is made up of many women’s and nonbinary voices: a polyphony that delights in a world where so many men’s voices dominate.

The second is The Shadow King by Maaza Mengiste. This novel, shortlisted for this year’s Booker, tells the story of the Italian invasion of Ethiopia in 1935. Again Mengiste’s voice is the authority: her central characters include Hirut, a young woman who takes up arms in the rebellion. Mangiste centers the women’s experiences of war in her story. There is even a Greek chorus that speaks at various points in the book commenting on the violence visited upon the Ethiopian people. In my mind, that chorus is made up of women.

The third piece of writing comes from an unknown writer from Kashmir called Saba Mahjoor. I recently read two short stories published online. “How to Love Militantly – Or How to Make Gulkand” is about a young girl who loses her first love to the violence committed by Indian armed forces. “On the Exorcism of a Married Woman,” describes how women subvert tradition and cultural constrictions surrounding fertility and childbearing by using their indirect power. I was exhilarated to read stories from a young Kashmiri woman when most of the recognized and established authors from this region are men. Her voice, quiet and melancholy, but completely assured and truthful, was speaking from the page right into my ear.

Such is the maliciousness of patriarchy that whenever a woman speaks or writes, on some level these activities are perceived as acts of resistance when they should be as natural as when men do it. Consider that women are our first storytellers: they tell children bedtime stories and sing them lullabies; they are the keepers of folklore and the traditions of their cultures. So many women are scared into keeping silent but women’s writing manages to uplift their voices, in song or verse or prose that shakes with its own strength. History is filled with women writing secret diaries, writing poetry or manuscripts published under masculine names, and even an entire language in rural China spoken only by women.

As a woman who writes there is no greater joy than the possibility of 300 pages in which my voice is allowed to achieve full throttle. This is why women push to be published and why it’s important for their writing to be read by both men and women, not banished to the questionable world of “women’s writing” and “chick lit.” The world is not a fair place when half its population is expected to remain silent and submissive. Its full potential can only be reached when this restriction is deliberately, purposefully lifted by the gatekeepers of publishing, but more importantly, challenged by women themselves in all forums.