A Novel by Joseph Olshan 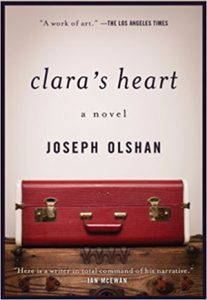 A young writer trying to finish his first novel has the whole world before him.  And this wider world is certainly a contrast to the finite world within his fiction.  When I was in my twenties and finishing my first novel, Clara’s Heart, I had no idea how the book would fare; I was, after many attempts, just trying to get the book right.  I had a larger-than-life character who seemed to know what she wanted and whose Jamaican patois became poetry whenever she spoke.  What Clara said was often as surprising to me as the writer as it became to the many readers who got to know her after the book was published.  Clara may have come from a different world and from a different culture, and yet she is probably my greatest fictional creation.  She somehow lives more vividly on the page than all the other characters I’ve created whose worlds are arguably much closer to my own.

And that was the magic that blessed me when I was writing Clara’s Heart. That was the inspiration that came from an almost mystical place.

When the book was finally published and sold to many foreign countries, I was surprised that my little story about a housekeeper who takes care of a young man whose parents are divorcing, could be related to by readers living in other languages and other cultures.  But then my Finnish publisher said something interesting to me. “Think of all the people who are hired to take care of children all over the world and who grow close to these children only to lose them when the children grow up. This is a story that anyone anywhere can relate to.”

Hollywood seemed to agree because a film, starring Whoopie Goldberg and Neil Patrick Harris was made of Clara’s Heart.