A New Novel by David Plante

Last November I was having dinner with David Plante, an American novelist who 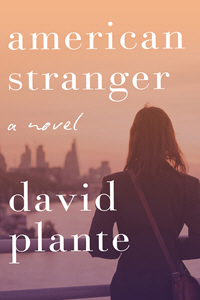 lives in Italy and just happened to ask if he had any fiction he wanted to publish. At the end of the evening, he emailed me a copy of a novel called American Stranger. I read it the next morning in one sitting and finished the novel in tears.

The book resonated with me because the protagonist is a young Jewish woman whose parents have hidden the painful past that forced them to emigrate to the US from Germany. In the lingering sadness of the atrocities they escaped, they have encouraged their daughter to seek a carefree and happy life. But this young woman feels as though she is inhabiting a spiritual wasteland and tries through a series of unsuccessful romantic relationships to find some meaningful religious context. She comes up empty-handed and ends up feeling like a stranger in her own country, a stranger in her native America.

Beyond this subject matter, with which I felt I could sympathize, I found the book’s simple, perfectly cadenced prose to be hypnotic and almost mystical. Each of the major characters yearns for something impossible and suffers in their yearning.  I was profoundly moved by the beautifully portrayed irony evinced in the final pages, the woman’s realization that although she ended up marrying a Jewish man from a similar socio-economic background, she feels more deeply connected to the Franco-American Catholic boy with whom she once had a passionate yet tragic affair. I was struck by and related to the idea that someone of your own kind could end up becoming more of a stranger to you than somebody from a different world and a different order.

We are publishing this haunting, elegiac novel in January and I am looking forward to seeing how it will be received. The book already has been published in France and acclaimed as “profound”, hypnotic, beautiful and incantatory.