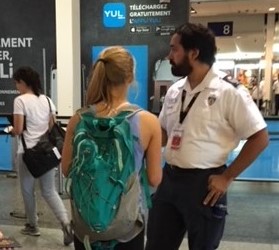 s envisioned a series of encounters between an assorted cast of characters and my protagonist as she launches her first solo expedition, a journey into the unfamiliar. Three of the chapters were published as short stories in literary magazines, but I didn’t get back to finishing the novel I’d projected. While I wasn’t content to let go of those chapters and regard them as loosely connected finished stories, I wasn’t sure where to take my protagonist, and I didn’t want her itinerary to be the sole determinant of her journey. The project’s long hibernation provided me with a new, invigorating vision, spurred by an encounter.

After a series of misadventures involving a lost passport and missed flights, I found myself sitting glumly at the airport in Montreal. My mood lifted as I watched – stared at – a piercingly handsome middle-aged Muslim kneeling nearby, directing his prayers toward Mecca. His noticeably dyed hair was growing out and the fact of this transfixed me. I knew nothing of his character except that he was devout enough to adhere to the rituals his religion required of him and I couldn’t reconcile that with him dyeing his gray roots. The mystery of that Muslim traveled with me for months to come and became the first person Betsy meets on her travels.

But he became much more than that. Having made almost a hobby of wondering about this stranger, of imagining him, I found in him more than another character to be met and left behind. He delivered the unusual structure of the novel to me. Perhaps there are several novels that feature a protagonist who crosses paths with other characters and then, while she goes on her way, the other characters’ stories unfold in the interleaving chapters without her, but I have not come across them. I began to reflect on how the layered stories of a person are not easily revealed, and how first impressions belie imperceptible nuances that sketch a fuller person. I devised this novel format for a novel because I wanted to tell not just Betsy’s story but his story too. More than that, I wanted to learn his story.

And that required months of research. About the Muslim religion, about the difficulties of travel to Mecca and the rituals of the Hajj, about the war in Lebanon during that time period, about the National Museum of Beirut, about Lebanese Arabic names, and more. But Kassim, whose name means “dispenser of food and goods,” became not just a fully realized character – he showed me how to proceed with the novel as a whole.

I did the same for the other characters Betsy met. I had the joy – and the challenge – of exploring a multitude of disparate lives to a depth that few novelists get to revel in. In the labor of writing this novel, I learned about subjects ranging from blackjack to rabbit farming. Like Betsy, I was having an adventure. The Opposite of Chance, a glimmer of an idea born in a particular moment and decade, has me looking back in time, with the tools that I have sharpened across years, words once scrawled with a pen now recorded and formatted with the technology of this time. I hope to bring something of the 1980s, and that pen, to the page.