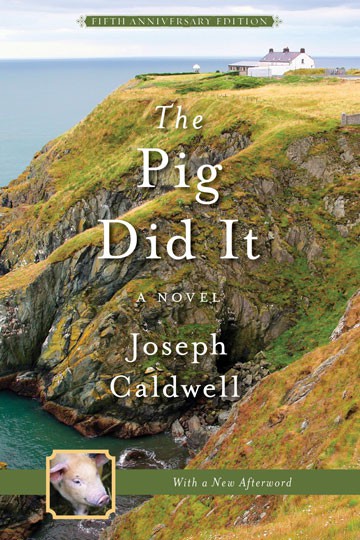 What the pig did – in Joseph Caldwell’s charmingly romantic tale of an American in contemporary Ireland – is create a ruckus, a rumpus, a disturbance . . . utter pandemonium.

Possibly the most obstreperous character in literature since Buck Mulligan in James Joyce’s Ulysses, Mr. Caldwell’s pig distracts everyone from his or her chosen mission. Aaron McCloud has come to Ireland from New York City to walk the beach and pity himself for the cold indifference of the young lady in his writing class he had chosen to be his love. The pig will have none of that.

Aaron’s aunt Kitty McCloud, a novelist, wants to get on with her bestselling business of correcting the classics, at the moment Jane Eyre, which in Kitty’s version will end with Rochester’s throwing himself from the tower, not the madwoman’s. The pig will have not a bit of that.

What the pig eventually does is root up in Aunt Kitty’s vegetable garden evidence of a possible transgression that each of the novel’s three Irish characters is convinced the other probably benefited from.

How this hilarious mystery is resolved in The Pig Did It – the first entry in Mr. Caldwell’s forthcoming Pig Trilogy – inspires both bitingly comic eloquence and a theatrically colorful canvas depicting the brooding Irish land and seascape.

Joseph Caldwell has written an engaging and funny tale about a lovelorn Irish-American who revisits the Emerald Isle, and through a series of comic mishaps and odd surprises, learns how to embrace humanity and fall in love in a new way.
― A. R. Gurney

Caldwell’s rich but precise prose, in itself, is a pleasure to read. His keen sense of setting, and a subtle humor that edges into the absurd, join in to make this story of love and loves in modern Ireland a delight.
― Neil McMahon

Maybe it was the pig and maybe it wasn’t, but one thing is certain: Joseph’s Caldwell’s The Pig Did It is the most delightful and sharply crafted book I’ve read this year–a mischievous, even devious, wallow in a thoroughly Irish mire of love, loss, murder, and redemption, with a prescient porker, frothy pints, errant darts, and even a little plagiarism of the classics thrown in for good measure. And did I mention the sexy swineherd? Oh, just read the book yourself. You’ll love it!
― Bob Gray, Shelf Awareness

Caldwell’s shaggy pig story, the first of a projected trilogy, puts farcical doings into lilting language and provides a payoff that is as unexpected as it is satisfying.
― Publishers Weekly