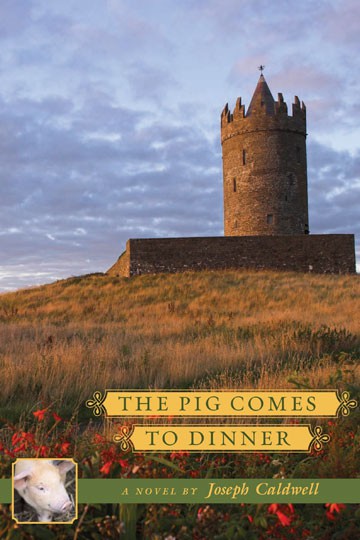 Back to his familiar mischief is the obstreperous creature that romped so riotously through The Pig Did It, the best-selling first novel in Joseph Caldwell’s Pig Trilogy.  But in Mr. Caldwell’s entertaining porcine sequel, The Pig Comes to Dinner, the porker has some more serious business to attend to.

All of the charming characters of the previous book are present again in this delightful new story.  Kitty McCloud has bought an ancient Irish castle with the profits from her popular revisions of classic novels like Jane Eyre, and is now hard at work on her “correction” of George Eliot’s “big mess of a novel The Bloody Mill on the Bloody Floss – the added expletives a measure of Kitty’s consternation.”

Kitty’s new husband, Kieran Sweeney, is tending the castle’s herd of cows when he isn’t locked in loving if contentious wrestling holds with his fiery new bride, his former rival in one of their district’s oldest blood feuds.  Kitty’s American cousin, Aaron McCloud, has arrived with his new wife, the former Lolly McKeever, to redeliver to Kitty and Kieran their wedding gift of the troublesome pig, who is not at all welcome at the castle.

But over their lighthearted discord hangs a weightier problem – Kitty’s new home is inhabited by two comely ghosts from out of the castle’s troubled past.  How this haunting couple is dealt with serves only to embellish the allure and humor of Mr. Caldwell’s uniquely theatrical storytelling.

It’s hardly surprising that Joseph Caldwell pays such keen attention to tricks of language in this novel, because he uses language so beautifully. That he is also funny as hell, glazes the pig.
― Roger Rosenblatt

Throughout, the whimsical tale is held aloft by a fanciful . . . lyricism that well conveys the spirit of its Irish setting and characters. In this story, humor and sadness, the past and the present, all live side-by-side, and it is all Kitty can do to tell them apart, much less keep the ghosts at bay.
― Publishers Weekly