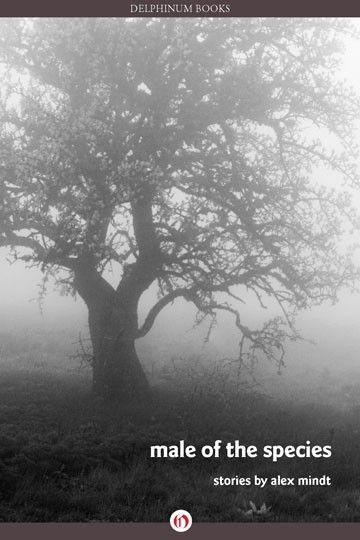 An antidote to Fathers’ Day. Alex Mindt’s debut collection goes behind the Hallmark Card and presents the realities and accompanying befuddlement and yearning of fathers and their offspring as they attempt to connect across cultural and generational divides. These stories will make you laugh out loud before they break your heart.

The author’s gifts have been rewarded with a Pushcart Prize and a Charles Angoff Award for Best Short Story of the Year as well as early praise from the following authors:

A deeply traditional Hispanic father hitchhikes to his gay daughter’s wedding; a football coach in deepest Texas risks everything by flunking the high-school football star — In “MALE OF THE SPECIES, Alex Mindt brings deft hands to deeply affecting matters of dusty grandeur and triumphant endurance. –Jacquelyn Mitchard, author, The Deep End of the Ocean and Cage of Stars

“Alex Mindt has the extraordinary ability to take on the many different worlds that make up America, as if he has lived in all of them with the most vivid understanding of each. This collection of stories expands the reader’s vision of a country that must hold together with the love and compassion with which Mindt himself holds it together. His stories are inspired, and inspire.” –David Plante, National Book Award Nominee for The Family

“In this remarkable debut, Alex Mindt skillfully portrays a series of unique and compelling worlds. The result is a captivating collection that is a joy to read.”  –John Searles, best selling author of Strange But True

“Alex Mindt writes stories with muscle, moral intensity, and language that is both brisk and readable. His variation on the familiar “teen-age son goes deer-hunting with his father” theme is priceless. But so is every other story in this remarkable, memorable, artful collection. –Michael Curtis, Fiction Editor – Atlantic Monthly

“The stories in Alex Mindt’s debut collection begin at a turning point in the lives of his characters and then proceed, with supreme skill and unerring pitch, to a miraculous moment of quiet revelation and grace, when their full humanity is revealed and our understanding of human nature is enlarged. This Chekhovian empathy for the wide-ranging cast of people who make up today’s America is a rare gift, and one of the highest order. These unforgettable stories already feel like classics.” –Jaime Manrique, Award Winning Author of Latin Moon Over Manhattan and Our Lives are the Rivers

“Criss-crossing the extremes of the American landscape, these stories ARE America:majestic and salt-of-the-earth, painfully funny and achingly beautiful. A haunting and stunning chronicle of our country and of our people; Mindt is a magnificent writer. This book killed me.” –Binnie Kirshenbaum, Author of An Almost Perfect Moment Alex Mindt has published stories in numerous magazines, including the Missouri Review, Fiction, Confrontation, the Literary Review, and The Sun. His plays have been produced in Seattle and Los Angeles, and he co-wrote, directed, and produced the feature film Nowheresville, which screened at the Cannes Film Festival and on Showtime and won the audience award at the Las Vegas International Film Festival. He has taught at the Gotham Writers’ Workshop and Columbia University. Alex holds a BA from the University of Iowa and an MFA in Creative Writing from Columbia University.