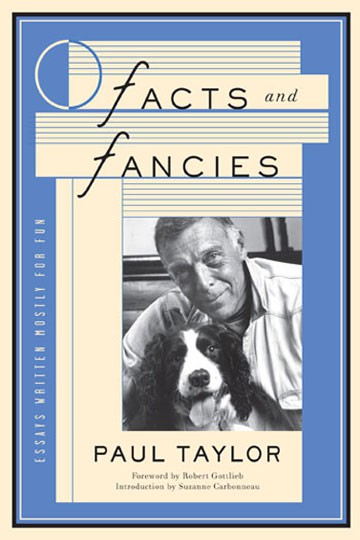 No other dancer ever looked like Paul Taylor, that strapping, elastic, goofy hunk of a guy, and no one else’s dance works look like his either – not the deep, dark ones or the zany ones or the uplifting ones. His vocabulary, his tone are unique and unmistakable. The same thing is true, it turns out, about his writing. His style is utterly his own, and like all real style it isn’t a calculated voice but a reflection of the way his quirky mind works.
― from the foreword by Robert Gottlieb

Taylor has not cultivated one writing persona, but has unleashed a raft of voices in a raft of forms: travesty, comedy, fiction, essay, satire, allegory, poetry, fable, epistle. While many of these selections are humorous, as anyone familiar with Taylor’s choreography knows, even in the sunniest of his dances, there are often threatening clouds on the horizon. And the canny Taylor recognizes when to swap his Janus masks for maximum emotional wallop.
― from the introduction by Suzanne Carbonneau

This wonderful new book by one of the preeminent dancers and choreographers consists of a range of pieces of fact and fiction that run from thoughts on friendliness and country living to animosity and city life. Taylor’s first book since his autobiography (Private Domain, 1995, Alfred A. Knopf), is a romp through the playful mind of Taylor, with chapter titles such as: Why I Make Dances., The Redheaded Spiritualist, Martha Close Up, Clytemnestra, and How to Tell Ballet from Modern, and In the Marcel Proust Suite of L’Hotel Continental.

FACTS & FANCIES is published in a beautiful trade paperback with French flaps and several drawings by the author. PAUL TAYLOR is one of the foremost American choreographers of our time. He began his career in the 1950s as a dancer and choreographer, retiring from performing in 1974. Known for his edginess and willingness to address the most sensitive of subjects, his dances often dealt with man’s place within nature, love and sexuality, life and death, and iconic moments of American history. Taylor has received a plethora of awards including an Emmy in 1992 and the National Medal of Arts in 1993.