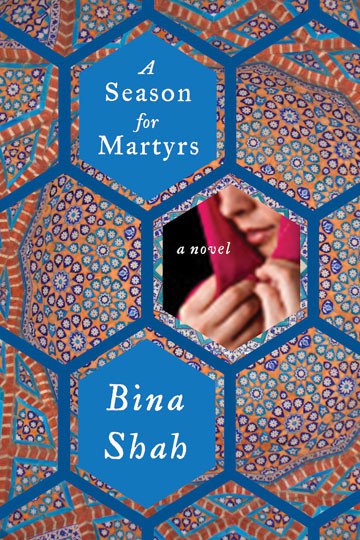 Advance praise for A Season for Martyrs

In A Season for Martyrs, Bina Shah mixes myth with history and the personal with the political to sing of Sindh in the past and mourn for Pakistan in the present: a musical and mesmerizing work.
― TABISH KHAIR, author of How to Fight Islamist Terror from the Missionary Position

A Season for Martyrs not only tells an excellent story, set in the last three months of Benazir Bhutto’s life, but deftly interweaves it with the myths of the Sufi saints, who are buried and remembered in the Sindh province of Pakistan. The historical and mythical aspects of this important novel are to be savored: Bina Shah is an admirable writer.
― BAPSI SIDHWA, author of Cracking India

Listen to the voice of Bina Shah–you will hear a young, confident, compassionate new Pakistan. Her latest novel not only sparkles with wit and wisdom but is a deeply moving paean to the power of love for the author’s Pakistani culture and people.
― PROFESSOR AKBAR AHMED, author, playwright, poet, and Chair of Islamic Studies at American University

An intriguing novel that blends events in contemporary Pakistan with ancient Sindh . . . Bina Shah has drawn heavily on her own cultural heritage, rich in its diversity and contradictions.
― VICTORIA SCHOFIELD, biographer, military historian, and author of Kashmir in the Conflict, Afghan Frontier and Bhutto: Trial and Execution

The U.S. literary debut of an up-and-coming Pakistani novelist and journalist.

The last three months of Benazir Bhutto’s life — from her arrival back in Pakistan on October 18, 2007, to her untimely death in a shooting-cum-suicide bombing on December 27th– is told through the eyes of a young television journalist in Bina Shah’s intense confessional novel A Season for Martyrs.

The estranged son of a wealthy landowner from the interior region of Sindh,  Ali Sikandar, is assigned by his producer to cover the arrival of Benazir Bhutto, the opposition leader who has returned home to Karachi after eight years of exile to take part in the presidential race.  But Ali finds himself swept up in events larger than his individual struggle for identity and love when he joins the People’s Resistance Movement, a civil group that opposes the current government of President Musharraf, the benevolent dictator turned strongman. Amidst deadly terrorist attacks, protest marches and rallies in favor of and against Bhutto, this contemporary narrative thread weaves in flashbacks that chronicle the history of Ali’s own feudal family and its connection to the Bhutto family.

As Shah illustrates with extraordinary depth the many contradictions of a country that still struggles to fully embrace modernity, Ali’s life  opens in a new direction and the young man rediscovers love, the desire to fight and the power to forgive his father. Bina Shah has recently become a regular contributor to The International New York Times. She is a Pakistani writer who is a frequent guest on the BBC.  She has contributed essays to Granta, The Independent, and The Guardian and writes a monthly column for Dawn, the top English-language newspaper in Pakistan.  She holds degrees from Wellesley College and the Harvard Graduate School of Education, and is an alumna of the University of Iowa’s International Writers Workshop.  Her novel Slum Child was a bestseller in Italy, and she has been published in English, Spanish, German and Italian. A Season for Martyrs is her U.S. debut. She lives in Karachi.